A work has started on new documentary about Gaide Rizaeva, who is real hero 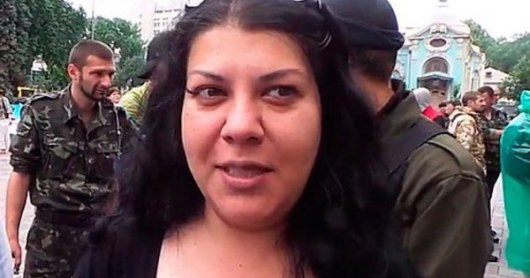 Tweet
This film is about young woman, civil activist of Crimean Tartar origin, who fights for her country and her people, although the price she pays is very high.

The idea of this project is to make the story widely known: this young woman of Crimean Tartar origin does what she can just where she is, fighting for her Motherland, helping other people and saving lives.

Are there many men whose spirit is as strong? Having been imprisoned by the terrorists, having been through terrible things, she is still full of hope and keeps on fighting.

Her grief and sorrows still chase her, her past life is in ashes, but her war is not over and her battle still goes on – till her land is free and the sky over her country is peaceful again.

This is a story of one heroic woman. Not many men are capable of doing what Gaide has done. But, in a way, all what she does became a kind of routine to her. May be she does not really understand how outstanding and enigmatic person she really is.

This project would demonstrate that the women of Ukraine bear the burden of civil activism and societal transformation just as much as the men do.

The story of Gaide Rizaeva is the example of what a woman can do in very tough circumstances – if she is mentally free and spiritually strong person.

Ukraine is in trouble. Though this war is often called “hybrid”, part of Ukrainian territory is still occupied, hostilities never end and people die every day. The risks volunteers and negotiators like Gaide take are huge.

There always is a risk for a journalist performing his duties in “hot” parts of the world. But this project is worth the risks taken – just as much as the fight Gaide and the whole Ukraine conducts.

When the revolution started in Ukraine, many people of all ages, nationalities, social strata, religious and cultural backgrounds upraised to protect their dignity – men and women, teachers and bank managers, students and veterans among them.

Being deeply ashamed with what their state authorities had been doing, the people joined their forces and raised their voices in the protests. The footages from Kyiv were watched all around the world back then.

Gaide Rizaeva, a woman of Crimear Tartar nationality, was on Maydan these days. She came to Kyiv immediately when she heard about the events that had taken place in the center of Ukrainian capital when the first protesters were severely beaten.

She left behind a good job she had in Crimea – she was a well-known lawyer, holding Honoured Lawyer degree of Crimean Republic. But she has always been a Crimean-Tartarian civil activist by the call of hear heart.

She just could not have stayed aside as she understood perfectly well: the future of Ukraine was on the stake. Having joined the protestors on Maydan, she headed «Crimean hundred» squad and fought with “law enforcement” forces hired by the regime.

Neither she remained quiet when Russian annexation of Crimea took place. That time the enemy had attacked her native land and her native people. Forced refugees began to arrive to Kyiv from Crimea – too many of them at once, with their families and kids.

There was an urgent need to accommodate them, at least temporarily. Gaide approached the commandant of Mezhygirya – former residence of runaway president of Ukraine. They agreement was reached. The troubled families settled there.

This huge and luxurious development built for the money stolen from the people now is in a right use. Many of those who Gaide had helped back then still live there, already for four years, having gotten their shelters and jobs.

Tragic events of annexation of Crimea by Russia coincided with the commencement of Anti-Terrorist Operation in East Ukraine aimed against separatists Russia supported and armed. It was tough enough for men, but Gaide found her role here, too.

As the militaries, especially in the beginning, were in a lack of everything they needed, many people volunteered to provide any kind of reasonable help and supplies, and Gaide Rizaeva was among the first ones in this kind of volunteer support.

In one of such volunteer's visit, one summer day of 2014, separatists caught her and her friends. They held them in a basement for four months, tortured and humiliated her. And they had severely beaten her at «interrogation».

She was on 4th month of her pregnancy when she was captured, and the baby did not survive the terrible conditions the mother was held in, the more these men provided no medical help. It was just unthinkable horror for a Muslim woman.

Her relatives did not know anything about her and decided that she had died. Her father did not survive this stress, having died of heart attack.

In fall they exchanged Gaide together with a group of Ukrainian soldiers for a bunch of terrorists. When the bus came, she refused to get in, insisting one more man of those captured with her should be freed, too. And the terrorists agreed to that.

Then Gaide joined «Patriot» group and became the important negotiator on captives exchanges. As agreed with the terrorists, she was given a right to visit Ukrainian prisoners of war on the other side of the front line with humanitarian mission.

It was in spring of 2015 when the captured Gaide again, this time during one of such humanitarian missions on the occupied territory of Lugansk region – they just did not like the maps they had found in her car.

This second captivity lasted for five month. It was easier, though, as Gaide told they did not torture her this time, only made her work. After another exchange session she came back to her previous volunteering and captives-exchange activities.

As she says, she would help the Ukrainian army till the very end of this war. Her son lives in Crimea, unwilling to leave the land of their ancestors. Despite worrying about him, Gaide understands and shares this point of view.

She is incredible strong woman, stunning for everybody because of her unbreakable optimism. But this impression is to a great deal superficial. Deep inside she is sensitive and fragile, and still holds her traumas and painful memories.

Even these days, two years after the captivity, she recalls those awful events and her unborn baby. All these things come back in her nightmares – the basement, cold, dark and wet, a tiny window and the faces of her tortures.

Despite all the terrible things she has been through, she in not going to give up. Her deepest and strongest wish is to make her land free and to let the other people in Ukraine understand the importance of mutual help and support to let it finally happen.