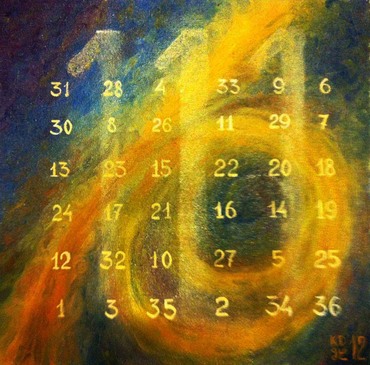 Tweet
Arithmism is a new style in contemporary art, presenting real world objects related to figures and numbers, or figures and numbers themselves, forming complete mathematical expressions, equations, numerical series or matrices with some definite meaning. Figures and numbers could also be read due to the way different objects are positioned on the canvas, or extracted through the quantity of the objects presented.

Genre and style peculiarities
Many works of the style resemble still-life paintings, however, the task is quite different. Sometimes paysage or genre painting elements are used. The styles and artistic methods could vary a lot, at some points getting pretty close to primitivism. The objects, their shapes and positions and the methods used by artist are brought under the command of mathematic meaning – the meaning which is always implied but not necessarily obvious.

Figures and numbers are everywhere, notice them or not. There is always a certain quantity behind any quality. Some quantitative ratio of definite parameters always determine intensity, direction and peculiarities of any known process. The numbers are standing behind, defining and presetting every known phenomenon of the material Universe. Thus, numbers appear to be universal instrument or information code to turn the world of ideas into the world of things.

Wrapped up in material world we perceive it with our own feelings. But the sensorium does not produce the numbers – only an intellectual effort is needed to “see” them, concealed in the reality of the material world. Every time we discover the numbers we perform a reverse transition – from the realm of things to the realm of ideas. Thus, the numbers are an idiosyncratical doorway between the worlds. The one who holds the doorway, controls both.

Arithmism is a style in contemporary art presenting reality as complete mathematical expressions, numerical series or matrix. In this respect arithmism is a top of realism. Arithmism is the art aimed on explaning and ruling the reality, rather than simply depicting it. The art which leads to the world of numbers and ideas. This point makes arithmism substantially different from realism in its traditional meaning. In fact, any art which stops at reality, copies shapes and imitate their materiality, is at the end enslaved by the things, their visible forms and surfaces. Arithmism calls for freedom of human mind, opening the door to the places where ideas and unseen meanings dwell.

Some artists have experimented with numbers, using them as a drawing tool. They create artistic or rather painting-like images composed of various numbers. Such works are entirely subdued to the method they were created with. Other artists just “portray” numbers – this way concentrating on shapes and colors of the signs and symbols. Arithmism goes much further – it vassals the methods, shapes and colors to contents and meanings, often unobvious and even concealed.

Understanding basic limitations of realistic art have pushed many artists towards experiments in alternative styles. At the end, all these pursuits lead to separation from reality, to devotion to forms and methods on expense of meanings and goals. All such artistic “-isms”, starting from impressionism, have been creating new dead-ends quite quickly, just replacing the old cul-de-sac of traditional academic realism. Arithmism is called for overcoming this despair. It leads to the world of numbers and further – to the realm of pure mind.